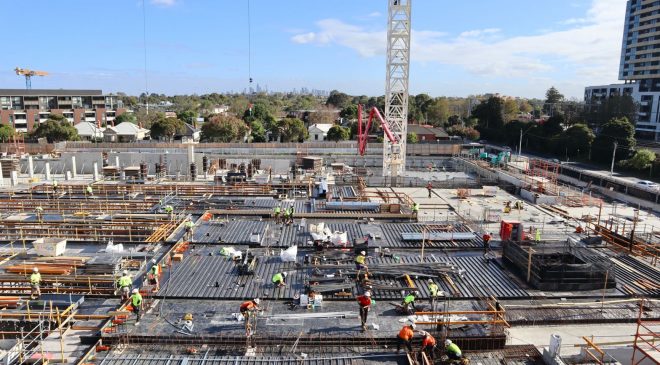 The number of cranes across a city’s skyscape is a fairly good measure of the health of the construction sector. But those cranes are also a pointer to potentially hazardous worksites – almost one in five workplace deaths in Australia is construction related.

Work is now underway to use the Internet of Things (IoT) and cloud computing to keep people safer on site.

Ynomia is a Melbourne-based technology company focused on developing and applying cutting edge digital solutions to solve some of construction’s most complex problems.

A project involving Probuild, one of Australia’s largest and most successful construction companies, and property giant ISPT, has demonstrated how it’s possible to use digital solutions to improve worker safety and also boost on site efficiencies.

With support from the Taronga Group’s RealTechX program, Ynomia built and implemented a system at Probuild’s Victoria University construction site that monitored whether safety screen hatches were open or closed.

The areas below the screens are broken into zones called operational safety zones (OSZ). When the hatches are open, the corresponding OSZ must be locked down as it poses significant risk to occupants. Due to their restricted access these zones below the screens are often in high demand and need thoughtful coordination.

That’s because a closed hatch is the best way of reducing the risk from a dropped object falling through the gap and hurting someone. This is a major risk for the sector which is striving to reduce worker risk and also rein in costs – the average cost of a dropped object injury in Australia is $104,370.

According to Simon Neeson, senior site manager for Probuild; “The uncontrolled release of an object from height due to unsecured or insufficient edge protection is one of the most prevalent and significant concerns on all building sites.”

The problem that Ynomia wanted to tackle was that it was in the past hard to know when those hatches were closed and the buildings edge secure, and when they were open, posing a risk. It turned to IoT and cloud for a solution.

Ynomia developed a technology solution that utilises CSIRO-developed Bluetooth Low Energy Aware Tracking (BLEAT) technology to monitor the status of the screens and hatches in real-time in a global first for the construction industry.

Data from Ynomia’s IoT devices is connected via LoRaWAN gateways to the Microsoft IoT Hub and Azure cloud, where it is analysed in real time to create dashboards and alerts, which instantly reveal which hatches and screens are in place and secure, and which are open. Any breach of the hatches – where they are opened without authority – is automatically identified.

Ynomia also created a zone booking system that integrates directly with the hatch monitoring system. This allows tradespeople to make a booking to access a zone knowing that it’s safe to do so and in the event that it becomes unsafe while occupied the system will raise the appropriate alerts.

In the past this relied on a paper based manual system – that meant there was significant lag between hatches being secured and this information being communicated to the site manager, often not until the following day. The site manager would have had to keep people away from the operational safety zones associated with those open hatches all day long, dramatically reducing productivity.

Now, as soon as the hatch is closed, the system recognises that and the site manager can safely return people to the area.

Improved safety awareness led to a decrease in the duration of unapproved hatch openings and with Ynomia’s system in place, there were zero incidents of dropped objects and thus zero safety incidents relating to dropped objects over the course of the pilot study.

Encouraged by WorkSafe Victoria’s positive feedback to a live, on-site demo, and general feedback from both Probuild and sub-contractors, Ynomia has begun to develop the digital Operational Safety Zone Booking System as a standalone safety product that is starting to garner significant interest from other Tier 1 builders both in Australia and overseas.

The company is also exploring greater use of digital twin technologies in construction. Digital twins use real time IoT sensor data to map on a computer exactly what is occurring on a physical building site.

According to Adam Jago, co-founder, Ynomia; “Operational Safety Zones are a key area of concern for project teams and management, however, these are not the only areas, or ‘spaces’, critical to successful project outcomes.

With that in mind Ynomia is developing a digital twin platform that it is calling Spaces, designed to provide even more clarity for construction companies.

Luke Stambolis, managing director Probuild welcomes the initiative; “The Ynomia OSZ Booking system delivered clear value in the form of measurable safety improvements at our Victoria University site, as well as realising significant productivity benefits among our supervisors and key trades. We’re excited to see how their proposed Spaces concept can deliver even more value across our future project pipeline.”