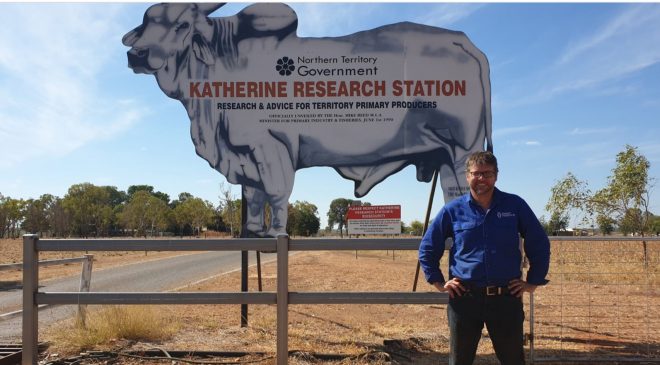 Finding out what’s wrong with buttercup with the help of cloud and IoT.

Australia has almost as many cattle as people. Add to the 24.7 million cattle in Australia, the 189,000 people who work in the red meat industry, the $15 billion gross value of the sector and it quickly becomes obvious that this is a big business.

Like any big business it faces challenges – not least is farmers knowing what’s up with Buttercup – where is she, what’s she doing, has she enough feed and water, is she calving? Farmers also want to understand if their herds are at risk from attack by wild dogs or cattle thieves, or facing biosecurity threats.

Darren Wolchyn is founder and CEO of Smart Paddock, a start-up agribusiness working to solve those challenges using its proprietary Bluebell tags and collars, which are solar powered and feature GPS, accelerometer and temperature sensors, and an innovative Microsoft cloud-based analytics platform.

Biometric data is collected on the tag, which operates as an Internet of Things sensor. The animal’s location can be found using GPS and data collected and analysed using Microsoft’s cloud.

The tag uses a sensor to measure temperature that provides much insight to the farmer. For example, a combination of raw data – temperature, accelerometer data and GPS – captured over time provides a good indicator of whether an animal is sick or calving. Cloud-based machine learning interprets the data for the farmer.

Wolchyn had used GPS technology to monitor the movement of golf carts as part of a fleet management system in his native Canada and when he moved to Australia, he decided to try using similar technology to track and monitor cattle movements.

With support from Telstra’s Muru-D accelerator program and the Microsoft for Startups initiative, Smart Paddock has continued to innovate and will release the latest version of its solution with a low-cost Bluebell tag at Beef Australia, the triennial cattle industry event being held in Rockhampton in May.

While the initial focus is on cattle, the solution could also be used to monitor sheep or other livestock – and as Smart Paddock’s technology runs on the Azure cloud, it could be exported anywhere in the world. Wolchyn expects his first overseas markets will be the US, Canada, then South America.

Data on the solar-powered tag is uploaded to the internet through LoRaWAN gateways.  These can collect data from tags within a 15km radius. For very large properties, LoRaWAN gateways would be set up at watering points that cattle would regularly visit. Smart Paddock is currently testing the use of helicopter- or drone-mounted gateways able to cover hundreds of thousands of hectares.

The data is used to locate each individual steer via GPS with satellite internet used in remote areas where there is no mobile coverage. The location alone can then be made available to the farmer via a mobile phone or app, and additional data also surfaced if needed.

Wolchyn said that the scale and reach of Microsoft Azure made it the clear cloud candidate. “We need to be able to pull in data from these animals in real time and do analysis on it.

Smart Paddock is also exploring how it can make further use of Microsoft IoT technology as well as edge computing, which will allow on-farm processing.

According to Wolchyn, “Being part of the Microsoft for Startups program allows us to spend more resources than we could afford and really test different things and different services from Microsoft to determine what the best approach is for us.”

In terms of connectivity, LoRaWAN gateways to the internet are currently being used; to access the information farmers also need internet connectivity. However Wolchyn said that the company is also looking at how it might be able to use Low Earth Orbit (LEO) satellites to provide services for farms without mobile phone coverage.

“One of the things we’re really looking at is if we could drop these types of gateways down on the farm and they can be solar powered and satellite connected. You could literally drop them anywhere out in the in the world basically. So we’re really starting to look at using low Earth orbit satellites for backhaul connectivity,” he said.

While being able to locate cattle using GPS is important to farmers, it’s the array of additional insights and analytics that delivers the major value, said Wolchyn.

Analysing how far an animal is walking to find water and making that information instantly available to a farmer can be immensely useful. Understanding if a steer is moving properly can help farmers assess its health. Knowing when a cow is about to calve is really important.

The system interprets where the cow is in relation to its social group and the rest of the herd, and also monitors accelerometer data for signs of calving.

“We’re working with government agencies, with the NT Department of Primary Industries on a calving project,” Wolchyn explains. “They’re doing research on calving mortality and seeing why calves die out in the outback.

“They needed someone to help track these animals down to do the research so they approached Smart Paddock.

If the calving seems to be taking too long, the farmer can head out to assist the process. Even a 5 percent reduction in calf mortality could have a huge financial impact for farmers, and represent a significant improvement in animal health and wellbeing.

The apps that Smart Paddock has developed have been designed to operate online and offline, as farmers will regularly work in areas with no phone or internet connectivity.

When the farmer is within range, Wolchyn explains that, “It’s an alert-based system, so we are detecting issues whether they just stray outside the paddock and get out of the fence, then we send an alert, or if we detect that an animal is down or there could be an injury or illness with the animal, the system will send an alert to the farmer.

“They’ll open it, get their text alerts, click on it, open our app, see where the animal is.”

If there is the risk of flooding or bushfire, knowing exactly where a herd is can be critically important.

While Smart Paddock is still enhancing the system it is being tested on 15 farms and properties with about 1,200 cattle tagged.

At present, the focus is on livestock, but Wolchyn believes the system could become part of a broader smart-farm management system, adding in extra data for analysis about everything from water levels in dams and troughs, to farm equipment and vehicles.

“The other big thing we’re looking at is biosecurity in the future,” said Wolchyn. “So you might have an instance where we’ll be able to detect illness and illnesses and diseases to a certain level, if we see an outbreak in this area. This could be an early warning system.

“It’s really about gathering the biometric information about the animal, its location, what it’s doing, its status, its behaviours, its interaction with other animals.